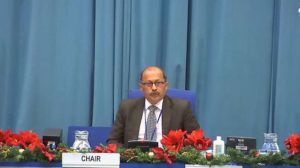 The historic vote in Vienna could have far-reaching implications for the global medical cannabis industry, ranging from regulatory oversight to scientific research into the plant and its use as a medicine.

The eagerly awaited approval of Recommendation 5.1 had a slim majority in favor with 27 votes for, 1 abstention and 25 votes against.

The CND – the main drug policymaking body within the United Nations – turned down all five remaining recommendations.

The result carries broad symbolic significance for medical cannabis, as it could help boost medical cannabis legalization efforts around the globe now that the CND tacitly acknowledges the medical utility of the drug.

“The medical cannabis wave has accelerated in recent years already, but this will give it another boost,” Martin Jelsma, drugs and democracy program director at the Netherlands-based Transnational Institute, told Marijuana Business Daily.

“And for those countries that basically mirror the U.N. scheduling in their domestic legislation, it may lead to national descheduling and remove obstacles to use cannabis for medical and research purposes.”

The vote could encourage countries to reevaluate how cannabis is classified on their own lists of narcotic drugs, potentially paving the way for more research into medical marijuana and its use as a treatment for a variety of ailments and conditions.

What should not be expected is a loosening of international controls governing medical cannabis.

“While the move doesn’t totally free the plant from treaty control, it’s a giant step toward the normalization of cannabis in medicine above all but also in our societies generally,” independent researcher Kenzi Riboulet-Zemouli of CND Monitor told MJBizDaily.

“Decades of efforts have been necessary to remove cannabis from Schedule IV, with implications that will slowly but surely be seen over the next decades.”

Drugs in Schedule IV of the 1961 treaty – where, until Wednesday, cannabis sat alongside heroin – are a subset of those already in Schedule I.

Schedule I – which includes fentanyl – already requires the highest levels of international control.

The schedules of the international drug control conventions categorize drugs considering their medical utility versus the possible harm they could cause.

Only the 53 current member states of the CND had an opportunity to vote, but the decision applies to all signatories of the international drug control conventions.

Did WHO go far enough?

Some cannabis advocates argue the WHO did not go far enough with Recommendation 5.1, as cannabis does not have a risk profile comparable to the other drugs in Schedule I.

But considering how difficult cannabis reform has been at the U.N. level, the removal from Schedule IV is a step researchers and businesses will celebrate.

The long-overdue decision comes about 60 years after cannabis was first included in the strictest category of the 1961 Single Convention, one of three treaties that are the cornerstone of the international drug-control system.

The WHO cannabis recommendations were first revealed in January 2019 as part of a complex package of six cannabis-related proposals.

Member states took almost two years to analyze the implications of accepting or rejecting the proposals.

After approving Recommendation 5.1, member states proceeded to vote on the remaining five proposals.

Recommendation 5.2 to move THC from the 1971 convention to the 1961 treaty failed to win the body’s approval, with 23 votes in favor, 2 abstentions and 28 votes against.

Recommendation 5.6 was about placing certain THC pharmaceutical preparations in Schedule III of the 1961 treaty.

Recommendation 5.4 – a proposal to delete “extracts and tinctures of cannabis” from the 1961 treaty – was rejected with 24 votes in favor, 2 abstentions and 27 against.

But according to the WHO’s explanation of the recommendation, it is simply meant to eliminate a duplicity and does not seek “to decrease the level of control of any cannabis related substance or narrow the scope of control.”

Recommendation 5.5 was rejected with 6 votes in favor, 4 abstentions and 43 against.

This recommendation represents a missed opportunity to clarify the confusing legal situation for CBD preparations with traces of THC.

The CBD proposal was drafted in an ambiguous way, and the WHO’s responses to member states’ questions about this recommendation over the past two years added confusion.

Some countries that voted against certain proposals did so not because they wanted to cast an anti-cannabis vote, nor as a way to question the science behind the recommendations.

Canada’s representative acknowledged that Recommendation 5.5 “was supported by scientific evidence and that CBD does not satisfy the criteria for international control under the drug conventions which are concerned with the risk of abuse and dependence.”

Canada recalled several member states’ concern over the use of a “footnote” to clarify this situation.

“Canada suggests that the WHO recommendation would likely meet with greater support if it were reformulated to align with the structure and purpose of the convention,” the representative said.

Although the meeting was hosted in a hybrid format with virtual presence possible, votes could be cast only in person in Vienna by the representatives of the countries that are current CND members.

Change Location
To find awesome listings near you!